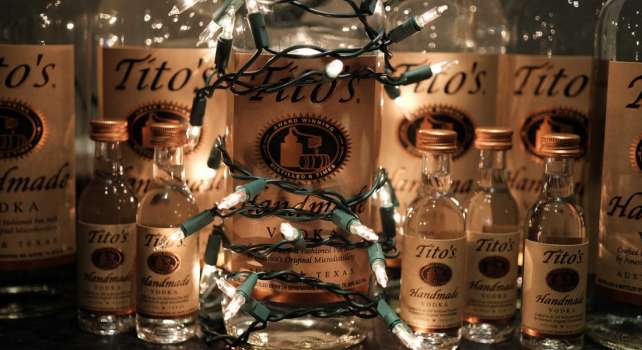 Tito’s Handmade Vodka, a pioneer in craft spirits, has surpassed Smirnoff and Jack Daniel’s to become the top-selling spirits brand in the United States in 2017, according to publication Wine & Spirits Daily. The publication cites IRI data for the 52 weeks ending Sept. 9, which does not include sales at bars.

Tito’s Vodka grew sales 44% in that period to nearly $190 million. Brown-Forman-owned Jack Daniel’s Black Label came in second at $178 million, with 2.2 percent growth, while Diageo’s Smirnoff is No. 3 at $173 million after sales dropped 1.1 percent, according to the liquor trade publication.

Titos, the only one of the top 40 brands on the list not belonging to a group, boosted its market thanks to its affordable prices and fun marketing.

The race for No. 2 is still tight. “Smirnoff and Jack Daniel’s are neck and neck with Smirnoff able to take the No. 2 spot in the four weeks to Sept. 9,” Wine & Spirits Daily reported.

Hot on this news, Bert Beveridge, the founder of Texas-based Tito’s, has been named as the newest spirits billionaire to join the list of America’s richest people.
The Austin-based owner made the list at number 324 out of 400 on The Forbes 400 list. According to Forbes, his company is estimated at US$2.5 billion and has sold 45 million bottles of Tito’s in 2016.
Beveridge started the company in 1997 with US$90,000 borrowed using 19 credit cards. He slept on floors and couches while he built the business.

The Texas billionaire is the only spirits producer to make the 2017 list, which also includes the Santo Domingo family, who holds a huge stake in beer giant Anheuser-Busch.

The brand is currently sold in 100 markets around the world including the US, Canada, Europe, the Middle East and Asia, and, of course, Malta & Gozo! 🙂

Earlier this year, the company donated 100% of the proceeds from its online store to charitable causes, allowing customers to select their charity of choice from six options at the checkout.

Tito’s Handmade Vodka is distilled from corn and is certified GLUTEN-FREE. Distilled and bottled by Fifth Generation, Inc. Austin, Texas. 40% alcohol by volume.

Find out more about the Vodka’s available from NMArrigo Ltd.

A Spectacular Week for Cigar Aficionados