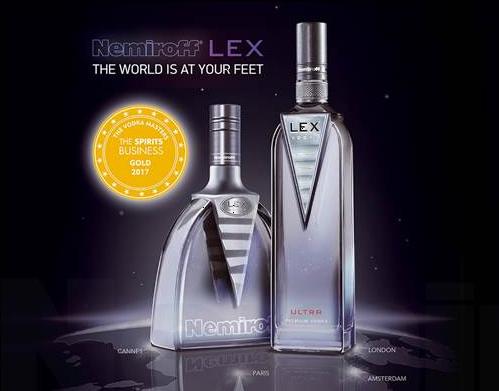 
At the Global Spirits Masters, organized by the authoritative magazine The Spirits Business, Nemiroff LEX vodka was awarded the gold medal. This is the twelfth worldwide award that experts have awarded this Ukrainian premium vodka. The fact that Nemiroff LEX has won such a premium award is further recognition of products at the international level.

Some revolutionary ideas in the production of Lex have been implemented. Exclusive to this vodka, is a unique technology of spirit selection. Only alcohol, which was aged more than six months, is used for production. Additionally, thanks to an 11-stage filtering process and the addition of alcohol flavoured with oat flakes, Nemiroff have managed to achieve a unique purity and softness. Nemiroff LEX is aimed at the successful, important, and wealthy consumer who has reached a level of success where the additional trappings of wealth are largely superfluous.

Nemiroff expert teams spent 2.5 years developing the recipe before LEX premium vodka was introduced to the world in 2003. The original bottle design is by Philippe Seys, the master of the famous French design Studio Version Originale. Each bottle is equipped with a cap produced by Italian company “Guala”.

The Global Spirits Masters is one of the best known and well respected international competitions. It is based on the method of “blind tasting”, with the participation of independent experts: bartenders, the owners of shops and bars, the staff of the magazine The Spirits Business, and many other luminaries.

Further reference and how you can buy this great Vodka in Malta please visit https://www.nmarrigo.com/products/spirits/vodka/#Nemiroff