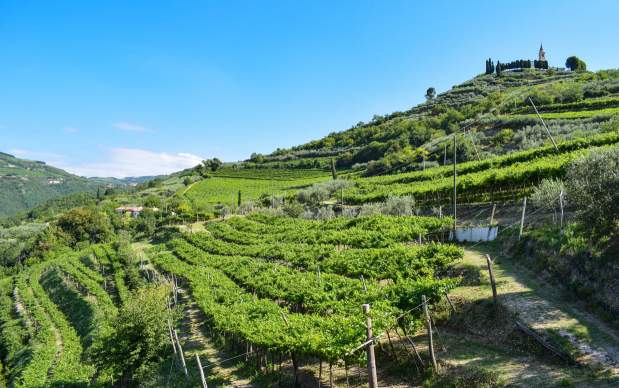 Against all expectations, in the first months of 2021 the Italian Wine region of Valpolicella (Vento also known for Soave, Bardolino and Prosecco) area has seen, a notable increase in sales and interest for its wines, both DOC and DOCG (Valpolicella, Ripasso, Regolo, Amarone, and Recioto). In fact, an overall growth of 18% was recorded compared to the same period of 2020, for a consideration of 30 million bottles. The 2021 figure also exceeds the bottled quantity by 14% in the first months of 2019. Authentic boom for Amarone, which flies in 5 months at +38%, despite a stuttering Covid January (-24.5%). According to the Consorzio della Valpolicella, this is the best performance ever recorded in the latest decade. The Consorzio takes care of promotion, value enhancement, and information spread for Valpolicella wines and territory and it is responsible for the tutelage of Valpolicella brand and viticulture in the wine production area. It is in charge of the surveillance, safeguard and protection of the appellation giving particular importance to sustainability. In fact, 7.4 million bottles were placed on the market in the first 5 months of 2021, 2 million more than last year. The data are also encouraging on the value front: recently there has been a 4.5% increase in the price of bulk wine. The bottling of Valpolicella is also back running, with +14% thanks also to a very strong acceleration in May (+48%) and in particular the Ripasso, which closes the 5 months of the year +12%.

A great part of Valpolicella success is linked to its history of production, strongly connected to its indigenous grape varieties, like Corvina, Corvinone, Rondinella and other local varieties, like such as Molinara, Oseleta, and Croatina, which give a unique mark to the wine styles: Valpolicella, Valpolicella Ripasso, Amarone della Valpolicella and Recioto della Valpolicella. Between Valpolicella’s valley floors at 50–200 meters above sea level and the highest mountain ranges at upwards of 600 meters, you have hills, high hills, medium slopes, and low slopes, all with different soil types and aspects. Winemakers contend that the afternoon sun’s impact on west-facing vineyards yields more intensely flavoured grapes than those from east-facing sites and vineyards that bask in milder morning sun. The slopes are separated by streams rather than rivers giving rise to a peaceful setting. Many producers will also tell you that exact placement within Valpolicella is much less important than hillside plantings, where, across the appellation, they find that a higher quality of fruit can be achieved than on the plains.

More information on Veneto here and on the Consorzio della Valpolicella here.

In similar news we have

New Zealand’s 2021 vintage is reported to be smaller than usual, but has been described as being of an “excellent quality”.

With the harvest in the southern hemisphere nearing completion, a “superb” summer has got the New Zealand wine industry looking forward to an great vintage, according to New Zealand Winegrowers. All reports indicate the quality of the harvest so far is exceptional, and we are looking forward to some fantastic wines coming out of this year’s vintage.

While it is still too early to confirm final figures, it is evident that the size of the overall crop will be down on previous years.This is attributed to cooler spring weather as well as frosts late in the season, and comes at a time when the industry is having to deal with increased production costs. Difficulties recruiting sufficient labour, due to the Covid-related closure of New Zealand’s borders, and a cap on the numbers of Recognised Seasonal Employer (RSE) workers from overseas, have also piled on the pressure.

There has been an unprecedented demand for New Zealand wine. This meant industry stocks were at low levels going into vintage, a situation that has now been compounded by the smaller harvest. More information at https://www.nzwine.com/

Best Vineyards to visit in 2020