Skip to content
Captain Caruana and Ten Green Bottles     * Free Delivery in Malta and Gozo * (No minimum order amount); or Pick-up in Store 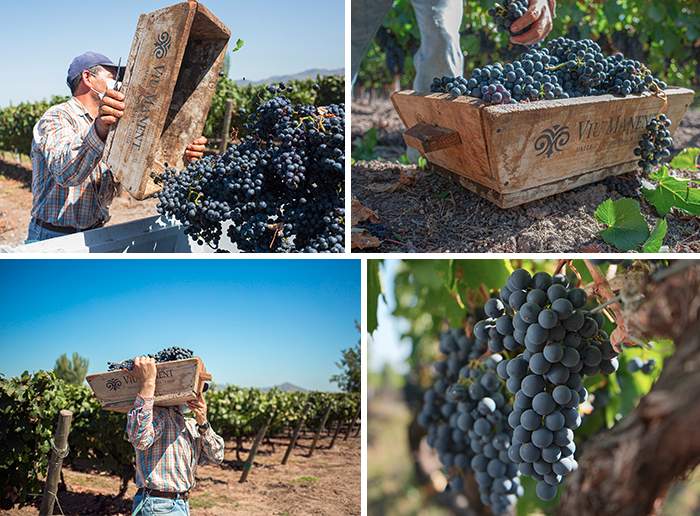 One of our favourite wineries, Viu Manent, wanted to share the vision of their winemaker Patricio Celedón of the 2021 harvest. Video included too.

The 2021 harvest will be remembered as a very cool harvest. It all began with one of the rainiest winters in the last few years, with around 600mm of rain falling throughout the winter months and beginning of spring. This aspect was very important as the vineyard began its phenolic and vegetative stages with enough moisture in the soil, avoiding any kind of stress that could later affect the final quality of the wines. On the other hand, since it did rain so much in winter, the water was very cold when absorbed into the soil, incorporating a greater quantity of oxygen when compared to irrigation or rain water that falls in warmer weather. The importance of a greater concentration of oxygen in the water means greater and better root growth, especially in depth, which adds balance to the plant, and later, increased quality in the wine.
In terms of temperature, it wasn’t cold throughout the winter; in fact, I’d say it was almost mild, but temperatures were delayed in rising until mid-spring, which pushed bud break back, but allowed it to develop evenly. In the second half of spring, specifically the months of November and December, we had normal temperatures, producing normal fruit set, which even led us to believe we might have a season with increased yields, which in the end did not happen.

Once summer began, and after fruit set (when the flower becomes fruit) temperatures began to drop, increasing the delay even more in the phenolic stages. Maximum temperatures averaged 3ºC lower in January and February than normal. The truth is this was rather rare, because La Niña, which sees ocean temperature drop, generating hotter, drier conditions in the interior valleys, was rather relative, and while these conditions were present in southern Chile (temperatures are lower than in central Chile and it rains all year), we had a dream-like summer with hot weather and a complete absence of rain, in central Chile, where most of the vineyards are located, temperatures were lower and there was an increased presence of humidity.

All of these conditions mentioned meant that we could delay the first irrigation of the season until mid-December, even January, which meant that the development of the vineyards was more natural, with little intervention in this aspect.

At the end of January, when the grapes had already undergone veraison (the onset of the ripening of the grapes), we had an important episode of rain in almost the entire central region, which added enough moisture in the soils of our vineyards, and thanks to this rain, we didn’t have to continue irrigating in the months to follow. After the rain, we had 1–2 weeks of lower temperatures that had us rather worried because of the delay in ripening, but we finally began to move forward in perfect conditions during the months of March and April. These months were especially benign, with almost perfect conditions and temperature for the grapes to ripen. All of this meant a harvest that was rather short and intense, beginning almost 2 weeks late and ending earlier, when compared to other cool years. Generally in Viu Manent, harvest lasts a total of 11–13 weeks, and this year it was 9. All of the conditions previously mentioned generated wines with increased levels of natural acidity, which for a warm valley like Colchagua is a welcome occurrence, as the balance of the wines is much better in terms of quality.

The final yields obtained were between 5–10% lower than we expected in the various vineyards. In general, we’re very happy with the quality of our wines, especially the reds, which have extraordinary colour thanks to the cool weather, with silky tannins that allowed us to extract just a little more, which is why we believe we’re in the presence of red wines with great ageing potential, so we recommend putting away a few bottles…

With respect to our white grapes, we followed the opposite strategy of last year, in which we accelerated and anticipated harvest, hoping to retain a good level of acidity in order to balance out the wine. This year, thanks to the cool weather, we waited quite a while before harvesting so the high acidity levels could go down, while at the same time waiting for the sugar in the grapes to increase. On average, the white grape harvest was 2–4 weeks later this year, when compared to a normal year.

The wines are expressive, showing characteristics faithful to their variety, with freshness and good volume. I think the Secreto Sauvignon Blanc stands out, because it shows very nice balance, maintaining the typical character of the wine. There’s ripeness but also freshness, and it’s a great wine to enjoy both as an aperitif, but also to accompany food. I also think the Gran Reserva Chardonnay is very interesting, since this year it has a fresher, more vibrant style than previous years thanks to the unique characteristics of the year. In the Reserva line, the wines have the expected level of quality.

Just like the white grapes, the red grape harvest began around 3 weeks later than normal, principally to wait for tannins to smooth out and at the same time allow the high acidity we’d had to drop. And while at the beginning of the red varieties’ harvest there was a delay of 2–3 weeks when compared to a normal year, we finished harvesting the last Carménère the last week of April, which is relatively early. This was the result of the unexpected weather conditions we had during March and April.

The red wines this year are showing extraordinary colour and very smooth tannins. A difference from other years is the level of natural acidity at the time of harvest, which was rather high. This was defined principally by the malic acid (a more aggressive acid) which was then transformed into lactic acid (smoother), during malolactic fermentation, leading to wines with very nice balance that maintain their freshness but without the extreme acidity that we were seeing at the beginning. The varieties, in my estimation, that will shine bright this harvest are Cabernet Sauvignon, Malbec, and Carménère, all of which are showing very good levels of concentration, great colour, rounded tannins, and big body that adds the support necessary in order to evolve well over time. At the moment, the majority of the wines have begun their ageing in barrels, foudres, or eggs, so now we just have to wait to see how they continue to evolve, the result of one of the coolest vintages in the last few years in the Colchagua Valley.

To conclude, I want to mention a new project that we’ve been working on during the last few years, which incorporates centenary vines from the Itata Valley, specifically Malbec and Cinsault. This year was an especially good year for the Itata Valley, where the vineyards are dry farmed, meaning they only receive rain water during the season, and are never irrigated. This is why the 30mm of rain that fell during late January allowed the plants to maintain their green leaves for a little longer, arriving at harvest with grapes in very good condition. Both the Cinsault and Malbec are showing great character, good freshness, and great texture, and they are already ageing in cement eggs, barrels, and foudres, allowing them to continue developing their potential in order to bottle them soon.


More Information at https://www.youtube.com/watch?v=XaxfWYAeo7M and here

Shampanskoye – Champagne producers up in arms